This deal is definitely magical! Direct from London’s West End, five world-class illusionists will perform as part of the “Champions of Magic” show at the Ellie Caulkins Opera House from July 25 to 28. Witness the impossible, including disappearances, levitation, teleportation and a heart-stopping finale. 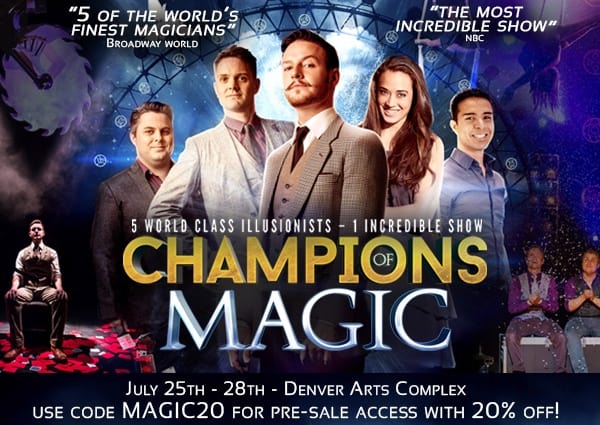 With more 30 million online views between them, the cast of top magicians includes international award winners presenting daring grand illusions, stunning close-up magic and incredible mind reading. Their skills have been seen around the world on TV with appearances on “Access Hollywood Live”, “The Next Great Magician”, “Good Morning Britain”, “The Today Show”, “Penn & Teller: Fool Us” and “Caught On Camera with Nick Cannon.” Check out their Facebook page here.

Tickets go on sale to the public on Monday March 19. However, you can perform your own money-saving trick by buying tickets early here today, Friday, March 16 through Monday, March 19 (until 10 a.m.) and save 20% with promo code MAGIC20. Ta-da!