← Just Between Friends Sale Offers Big Savings on Toys, Clothing & More — Up to 90% Off
Enchanted Forest 2022 Beckons Families To Nederland →

Su Teatro Cultural and Performing Arts Center (721 Santa Fe Dr.) is collaborating with entrepreneur and philanthropist Max Appel to share the riveting story of Denver’s Westside Jewish Community through a limited engagement play, Promise on the Hill: My West Colfax Memories, showing September 22, 23 and 24 at 7:30 p.m. 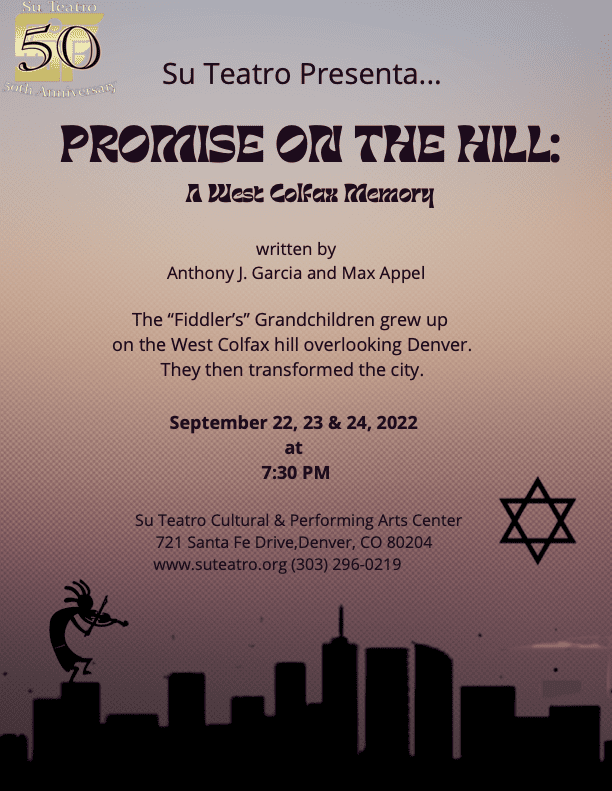 The theatrical memoir, written by the creator of OxiClean, Max Appel, and Su Teatro’s Executive Artistic Director, Anthony J. Garcia, invites the audience to take a step back in time and experience the Jewish community that once populated Denver’s West Colfax neighborhood from 1930 through the 70s.

The compelling ambitious new play recounts the experiences of a generation whose parents had immigrated from Eastern Europe to escape the horror of the pogroms. A community bound together by cultural and spiritual tradition transformed the city of Denver as the “Westside” which produced a significant number of successful educators, entrepreneurs, doctors, lawyers, civic leaders, and philanthropists.