We are the champions! Our beloved Colorado Avalanche defeated the Tampa Bay Lightning 2-1 in Game 6 to win the Stanley Cup. For fans, it’s been a long journey, since they last won in 2001. (For the record, this is the team’s third championship title in the franchise’s history.) And you can’t celebrate a victory without a party! 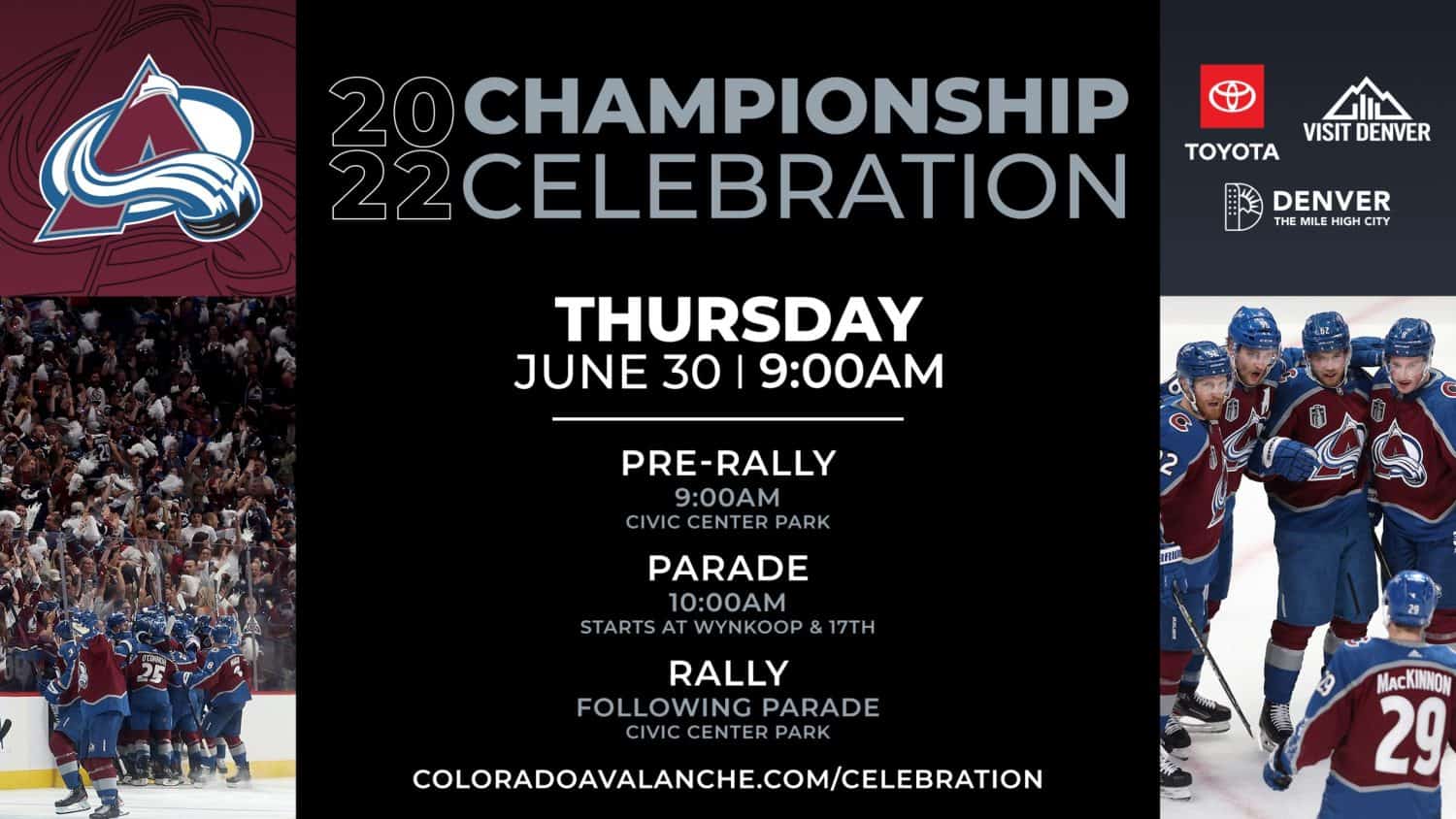 The Colorado Avalanche 2022 Championship Celebration is presented by Your Front Range Toyota Stores, VISIT DENVER and the City and County of Denver, with community partner support from the Denver Metro Chamber of Commerce and Downtown Denver Partnership.

All of the hootin’ and hollerin’ takes place on Thursday, June 30.

Be sure to wear sunscreen, bring lots of water and don your Avs gear. Leave everything else at home.

Here’s a map of the parade route: 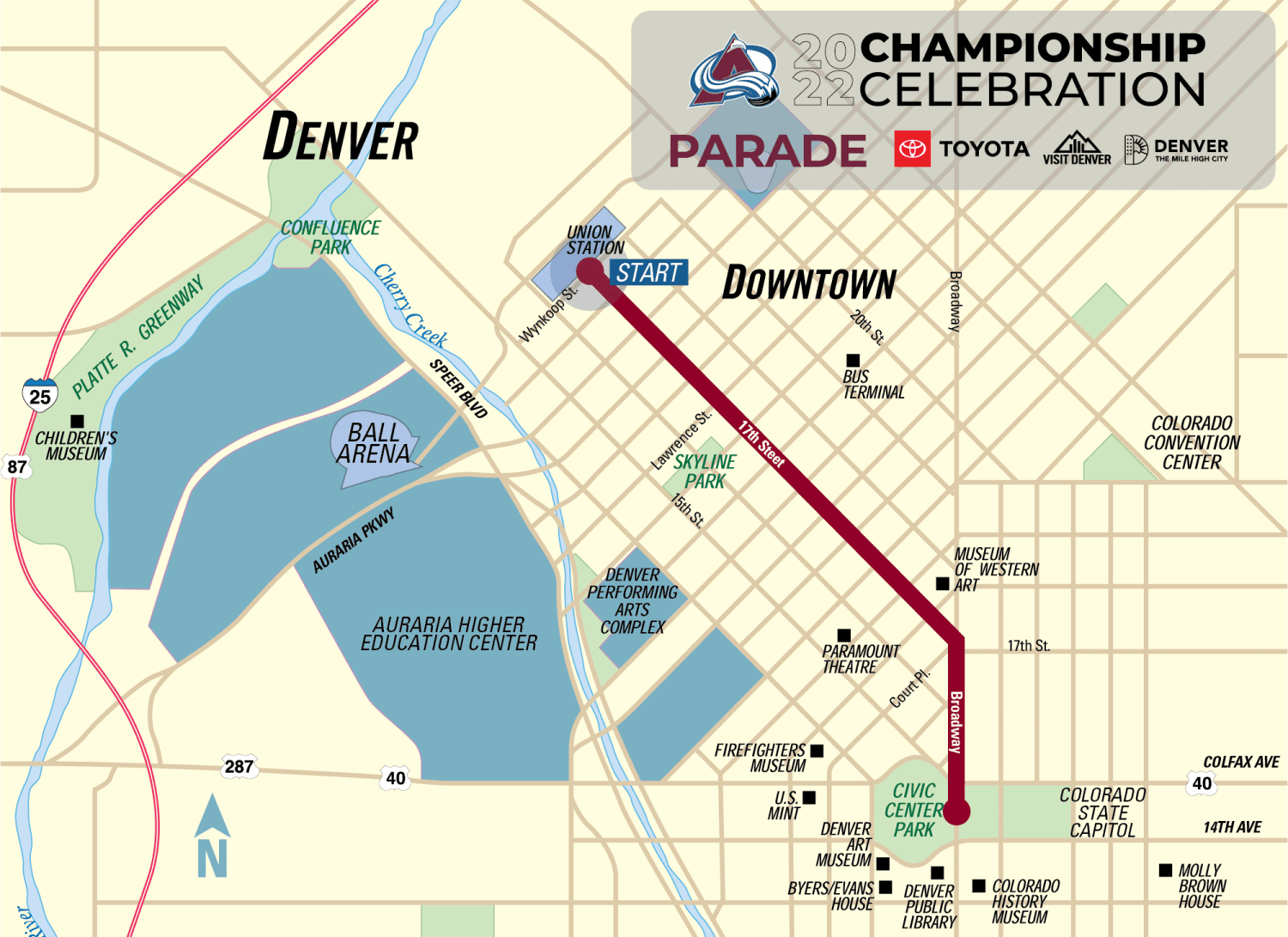 The Rally will take place on a stage on the top steps of the City and County Building at Civic Center Park. Video screens will be positioned on Bannock St. and in the park, showing live shots from the parade and entertainment on the stage.

Entertainment will start on the stage about 9 a.m. The Rally is estimated to begin about noon and run until 1 p.m. or so., but those times could change.

The is no seating, so be prepared to stand.

Here’s a map that shows you where everything is located, including the all important portable restrooms. 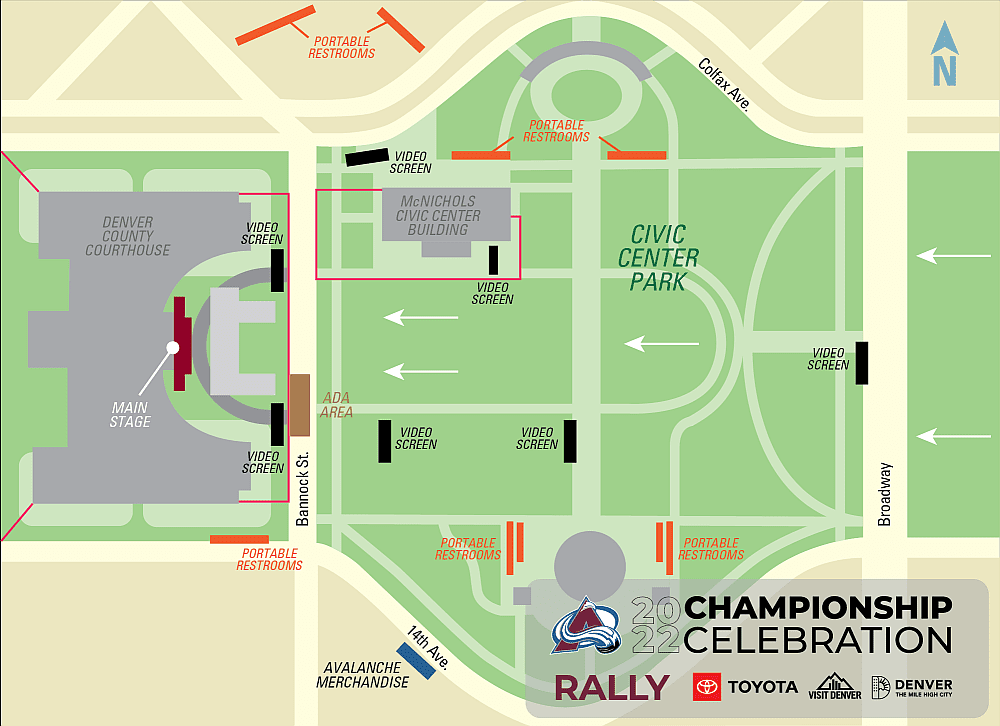 Let’s get real folks, parking will be a nightmare! Several downtown streets will be closed. Thousands are expected to attend the celebration. Use public transportation or ride your bike, if possible.

The following roads will be closed and parking unavailable:

For more information and to find everything you need to know about the victory celebration, visit ColoradoAvalanche.com/Celebration.

Show your hometown pride! Find all of the official Stanley Cup Champions 2022 merchandise at NHL.com. Use promo code NHL24FS for FREE shipping on orders more than $24. The promo code is valid for a limited time.

You can also find lots of Stanley Cup Championship merchandise at the Colorado Avalanche’s official team store, Altitude Authentics. However, there are currently no promo codes available.

You’re also likely to find lots of merchandise at many retailers in the next day or so.

For those who want to avoid  the crowds and watch the parade and rally in comfort, a FREE Watch Party is planned at Denver’s Union Station from 10 a.m. to noon. in the Terminal Bar. Enjoy $5 Breakfast burritos and drink deals while watching the festivities.